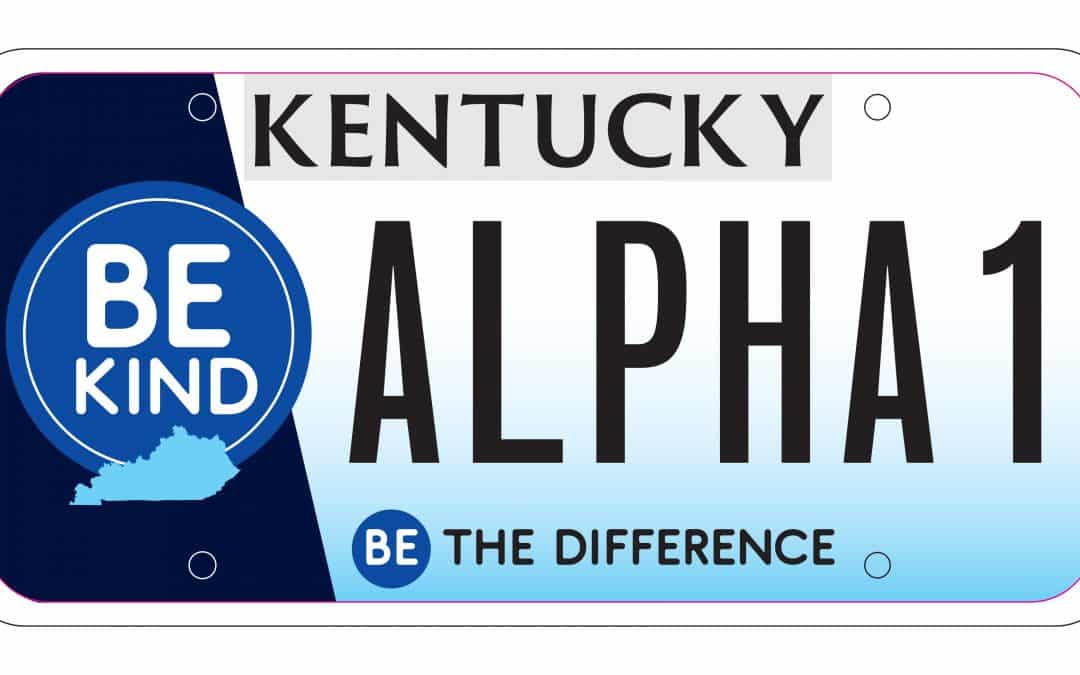 Morgan and Susan Guess, co-founders of the Guess Anti-Bullying Foundation, were approved for a statewide personalized “Be Kind Kentucky” personalized plate.

The duo appeared before The Kentucky Special License Plate Committee this morning. The Guesses will donate all proceeds received from license plate sales to provide food and training at the 14 youth mental health drop-in centers across Kentucky.

“This is an important day in our journey to create kinder Kentucky schools and communities,” said 17-year-old McCracken County High School senior Morgan Guess.  “Nine years ago, I was being bullied at school. I didn’t tell anyone and by the time my parents discovered it, I was experiencing stomach spasms and panic attacks. I was diagnosed as clinically depressed and took anti-depressants for nearly a year.  Instead of blaming others or ignoring what happened to me, I chose to make a positive difference.”

The Guesses lobbied former Governor Steve Beshear to appoint a statewide task force to study the issue and both were appointed to a 26-member panel.  Morgan successful testified to the Kentucky legislature for a bill to define bullying and that law now provides protection for all 640,000 Kentucky public school students.  They hosted speakers and resources to Kentucky schools along with their annual kindness walk. They host Scarf in the Park on each Christmas Eve to provide hats, gloves, scarves and socks to those in need of items to stay warm in the winter.  They also have sponsored two kindness murals – one on the back of MAKE and one this summer on the tunnel of Noble Park’s Greenway Trail.

Morgan has also become a national voice being featured in American Girl magazine, CNN and articles posted in the Huffington Post and the Harvard University Graduate School of Education website.  She was selected to be a part of Hasbro Toy Company’s “Be Fearless Be Kind” national campaign and serves on Harvard University’s Making Caring Common Alumni Board.  Morgan won a national Jefferson Award last year, was named one of America’s Top 10 Youth Volunteers by the Prudential Spirit of Community Awards, and is an Ashoka Changemaker. Both Guesses were awarded the Kentucky Justice Association Consumer Safety Award and Governor Steve Beshear gave them both top volunteer honors through the Kentucky Community Volunteer Awards.

The “Be Kind Kentucky” plate will be a part of a new flat surface license plate that will debut on Kentucky vehicles.

“We believe in the power of kindness and in the positive message these plates will share across our great state and all around the country as our citizens travel.  Kentuckians will have an opportunity to stand up for kindness by displaying these plates on their vehicles. These plates will also support drop-in centers that are critical to helping our youngest citizens receive the support and services they need to be productive and healthy.”

The Guesses “Be Kind Kentucky” plate likely won’t be available for purchase until early 2022.  Their plate will be a part of a new flat print license plate that will be debuted in the coming months.

The most significant difference in the new plates is in their manufacture – digitally printed on flat aluminum instead of traditional, embossed metal with raised letters and numbers.

The larger, unseen difference will be in savings to the Kentucky Transportation Cabinet (KYTC) on storage space, bulk manufacturing and unused inventory. With digital technology, standard and specialty license plates can be produced as needed rather than having to be mass-produced.

Kentucky Correctional Industries (KCI) will continue to manufacture the plates at the Kentucky State Reformatory. But with digital technology, KCI will be able to print the requested number and ship them directly to county clerk offices. Under the current process, the state must account, store, and handle over 300 license plate types at over 145 locations and two warehouses.

KYTC had planned to begin introducing digital plates in late 2020. However, because of the COVID-19 pandemic, the reformatory and its plate production had to be shut down temporarily, so digital plates are being introduced ahead of schedule.

Newer plates will gradually replace older license plates. There is no change in procedure for vehicle owners, who will continue to purchase plates and register vehicles with their county clerks. Fees for the plates will remain the same, as will the lineup of available special plates